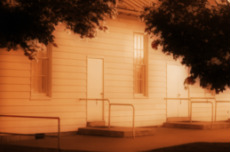 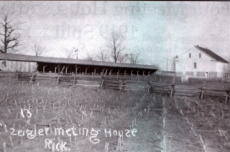 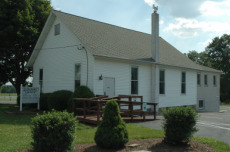 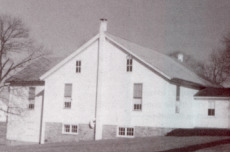 The Little Swatara Church of the Brethren was officially organized in 1757. German immigrants had been meeting in each other’s homes and barns for some years prior to that year. The group continued worshipping in homes until 1848 when they built the Merkey Meeting House, north of the village of Bethel on Route 501.

In 1875, the congregation built two large meeting houses, the Ziegler house is located a half mile north west of the village of Rehrersburg. The Frystown House is located on the south edge of the village of Frystown. In 1923 The Schubert house was built. Since this was the horse and buggy age, families tended to worship in the meeting houses closest to their homes. Two meeting houses were also built in the Fredericksburg area, one in town and one two miles to the south.

After 1919, the congregation split into separate groups. Those closer to Fredericksburg worshipped there. Those to the east of Little Mountain Road rotated between the four local meeting houses. With the advent of cars, people traveled to whichever house was being used that Sunday.

By the 1950s, the congregation had grown and needed more space. After years of planning, the present, modern facility was built a mile west of Rehrersburg, PA and the meeting houses were sold to other groups. The facility has been updated several times, making it fully accessible, and adding modern sound and video systems. A Preschool was added in the 1990’s. Most recently the building received a major face lift including new windows, roofing, and a new entry way with a drive through pavilion. The grounds also include a playground, and a well equipped picnic pavilion which plays host to many activities in our church life.

Each Sunday we have both an 8:15 and a 10:30 worship service. Several times a year we have only a 10:30 service which is tied to another event at the church such as major holidays or the Sunday School picnic.

Our Sunday School provides care for babies in the nursery and has an extended session for small children for parents who elect to place their children there. Classes are provided for those ages two through their 90s. We have active Jr. Hi. and Sr. Hi. programs. Adult classes are designed around different types of curricula. Adults are invited to select whichever interests them.

Music is central to our worship. We have three choirs: children’s, youth, and adult. From time to time we have a bell choir and a worship team. Both a men’s and a women’s quartet provide music as needed.

Each July our Christian Education Ministry Team organizes and leads a Bible School which culminates with an evening picnic and program. There are many other activities through out the year including a car and antique tractor show, yard sales, a Christmas Bazaar and many special dinners and social events.